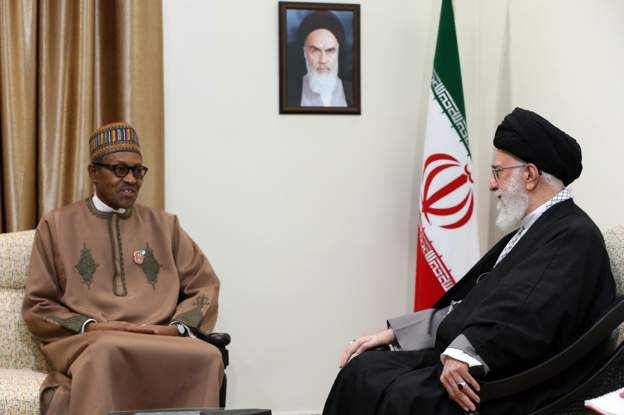 Supreme Leader of the Islamic Revolution Ayatollah Seyed Ali Khamenei called extremist terrorist groups the enemies of Islam and said Muslim nations should cooperate to confront them and defend the identity of Islam.

Speaking at a meeting with the visiting President of the Federal Republic of Nigeria Muhammadu Buhari in Tehran on Monday, Ayatollah Khamenei described terrorist groups which are acting in the name of Islam as the enemy of the religion, and said the groups and the outspoken enemies of Islam are “two blades of the same scissors”.

“The Islamic countries should protect their identity and interests against the dangerous enemies through promoting cooperation,” the Leader noted.

Ayatollah Khamenei further pointed to the US-led coalition against terrorist groups like ISIL (also known as Daesh) and Boko Haram, and said it is wrong to pin hopes on the assistance of the US and the West in the fight against terrorism.

The Leader noted that Americans and some regional states are playing destructive role in Iraq and are directly supporting Daesh.

The ISIL, as a Takfiri group in Iraq and Syria, is believed to be supported by the West and some regional Arab countries.

The terrorist group claims as an independent state the territory of Iraq and Syria, with implied future claims intended over more of the Levant, including Lebanon, occupied Palestine, Jordan, Cyprus, and Southern Turkey.

Regarding bilateral relations between Iran and Nigeria, the Leader emphasized that there are many grounds for closer cooperation between the two countries, and added that the capacities of the two countries should be utilized in this regard.

Heading a high-ranking delegation, the Nigerian president is in Tehran to attend the 3rd GECF (Gas Exporting Countries Forum) Summit due to be held later today.

The GECF is a gathering of the world's leading gas producers and was set up as an intergovernmental organization with the objective to increase the level of coordination and strengthen the collaboration among member countries.